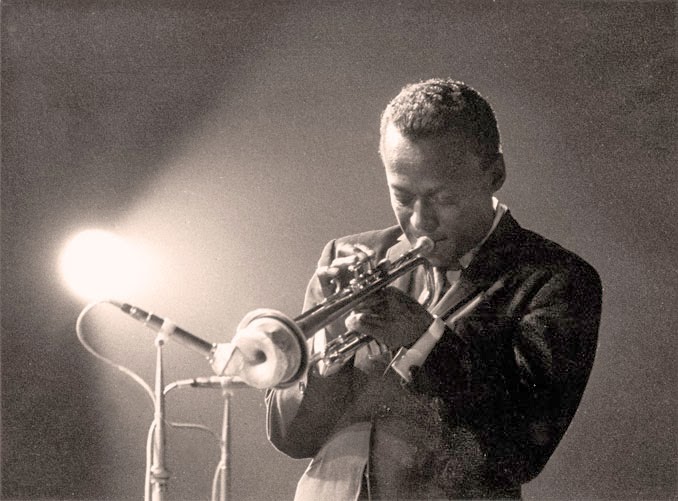 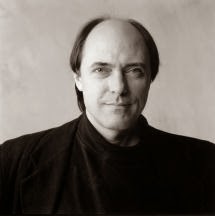 A couple of quotes from a great essayist, Geoffrey O'Brien:


Beyond all echoes of yesterday's mythologized excitement, the records--whether "The Night Before" or "Drive My Car" or "I'm Only Sleeping" or any of the dozens of others--lose nothing of a beauty so singular it might almost be called underrated. (Sonata for Jukebox, p. 157)

and on music in general: 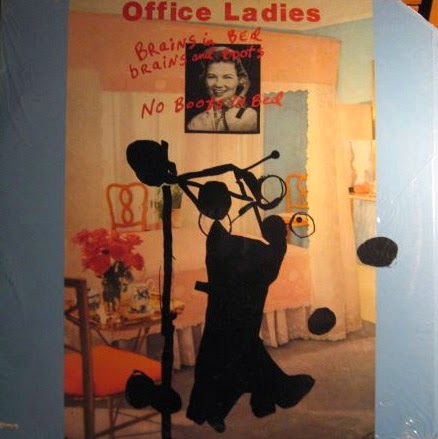 Here's a little background about my life as a musician. I've been playing drums since 1969. From 1969 to around 1972 or '73 I played in a rock band called the Martin band, or just Martin. Around 1977 I started trying to play sax and failed miserably so I switched back to drums. From 1977 to around 1982 I played experimental music with my brother Jeff, then in 1983 along with Roger Kern we started a band called Tad Thaddock, which lasted until around 1986. We played a fair amount in Richmond Va., mostly at the Main Street Grill, and we released two cassettes.

From 1987 to 1988 I played drums for The Office Ladies. We put out an album called Brains in Bed, Brains and Boots, No Boots in Bed on New Alliance (cover above, by Jeff). Then I moved to Boston. More later!
Posted by Sam Byrd at 4:35 PM 2 comments:

Email ThisBlogThis!Share to TwitterShare to FacebookShare to Pinterest
Labels: music

I usually have more than one book going at a time, so I like to keep track of my progress with a reading list. These lists won't include random articles or blogs I read online, or all the stuff I read for work. These are mainly books, although I'll list an essay here from time to time, like the one in this week's list: appropriately enough, for this topic, William Gass's excellent essay on lists, "I've Got a Little List," from his book Test of Time. If you're at all interested in lists, I highly recommend this essay. Check out his list of organizing principles of lists:


The organizing principles of lists, then, are
a. as encountered or found (the contents of the pocketbook), or as remembered (a guest list), or as needed (to reorder when supplies run out); or
b. as arranged by an already ordered external system, often so that the items on the list can be easily found (alphabetically or numerically, for instance), a systematizing which sometimes becomes hierarchical; or
c. as dictated by the order of the things themselves (library list and library shelves), certain inventories, or the table of contents of a book; or
d. as rated in terms of some principle of value or importance. (pp. 81-82)

Yeah! Now we're talking. He goes on to mention some authors famous for incorporating lists in their work, but he neglects to mention one of my favorites: Gilbert Sorrentino. Later on maybe I'll quote a few Sorrentino lists; he was a true master. But before this gets away from me, here's my reading list from last week:

So, here's some of what I've been listening to for the past week. These playlists won't be complete: I don't keep track of everything I play on my iPod. I can say that the Magic Jukebox is loaded with a lot of Beatles, Beach Boys, and Sun Ra--so even if they don't show up on my playlist every week, not a week goes by without my listening to several songs by one or all of those artists. I tend to play the Magic Jukebox when I'm doing dishes or trying to wake up. Mornings are rough. I'm not a morning person.

For the last few years I've been picking an artists and listening to everything I have by them in rough chronological order. It's fun to do; I get reacquainted with lots of stuff I haven't revisited in a while, and I get a different perspective on their work in the process. So far, I have gone through all my recordings of Cecil Taylor, Anthony Braxton, the Art Ensemble of Chicago, Sam Rivers, Charles Mingus, and Andrew Hill.  The next three are biggies:  Miles Davis, John Coltrane, and then Sun Ra. I was putting off Sun Ra for a while because I was following along with Sun Ra Sundays, but those are up to 1978 or '79 now, and I want to go back and start again from the beginning. That'll be a while, though. I just started Miles, and there's a hefty amount of great stuff to get through!

At any rate, here's my playlist for last week:

Some thoughts on why I enjoy reading about music, revised from an old email:

There’s this great early take of “It Won’t Be Long,” take 7. It unfortunately only exists as a monitor mix, so the sound is a bit distant, but compelling nonetheless.  It chugs along pretty much the same as the released version, until it gets to this magical point right after the first verse and before the chorus: right before John sings “It won’t be long, yeah,” the whole band comes to a halt and there’s this one great beat of silence, a stop-time moment that changes the whole tenor of the song.  They repeat this before every chorus in the song.  It’s one of those moments that, once you hear it, makes you never hear the released version the same again.  It’s not better than the released version (hours of listening to Beatle outtakes and alternates proves nothing if not that they almost always made the right choices on what to keep in and what to discard), but it’s a knockout version in its own right.  It’s powerful, it’s dynamic, and it reaffirms for me that “It Won’t Be Long” is one of the Beatles’ absolute greatest early rockers.

In reading Richie Unterberger’s book The Unreleased Beatles, I was interested to get to his take on this version.  Here’s what he says:  it “isn’t much different from the With the Beatles track at all.  The main difference is how the fellows periodically come to dead pauses between the verse and chorus instead of playing all the way through” (p. 66).  Huh.  Is that all he could find to say about it?  How could he hear something so totally different from what I hear?  And how could he not be excited about the difference?

While I disagree with Unterberger from time to time on his assessment of many of the unreleased tracks, he does pay attention to detail.  What bothers me most is that his prose is pedestrian and lackluster, and he tends to second-guess the Beatles a lot (saying things like “this probably means they meant to...”).

But the point I’m trying to make is that reading what he wrote about “It Won’t Be Long” helped me articulate what I think about it.  I thought it all along, from the first time I heard it, but seeing a counter-opinion in words helped me put into words what I thought.  Potentially, those words could help others articulate their own thoughts—and thus you get discourse, communication, exchange of ideas—a positive thing.  And, thinking about the words made me think more about the music...and sent me back to listen again.

These points make up a large part of why I read about music.

I spend a lot of time rereading Shakespeare.  I’m reading different editions and really getting into the variations between the quarto and folio texts, and I enjoy getting mired in the scholarly discourse over the tiniest bibliographical details.  I’m also slowly working through the ArkAngel series of BBC recordings of every play on CD; reading the plays along with the voices is tons of fun.  I find this work endlessly fascinating.  I came across a nice quote when reading Ron Rosenbaum’s excellent book The Shakespeare Wars.  In it, he sums up many of the recent controversies and issues in the Shakespeare community (did he revise his plays or not?  is the “Hand D” sample his actual handwriting?  is it better to read the plays in their original spelling? etc.).  At one point in the first chapter, he’s addressing the issue of why Shakespeare is so revered—what is the value of his work, and what’s made it so enduring?  He quotes scholar Christopher Ricks:  “the test of value in a work of art is ‘whether it continues to repay attention’ “ (p. 21).  Note that he makes a point of saying not just that it repays attention, but that it continues to repay attention.

Two things struck me here, not huge flashes of insight, surely, but compelling to me anyway:  Shakespeare surely does that, continues to repay attention, and so, too, do the Beatles, and so, too, does Sun Ra.  These are lifelong endeavors; these bodies of work will continue to reward and re-reward us however close and detailed the attention paid to them is.  I have certainly found that to be true with the Beatles, and I’m finding it to be true the more I delve into the music of Ra.

The second thing that struck me is that if these bodies of work, these works of art, are indeed bottomless wells of inspiration, then part of that inspiration, no small part for me, comes from reading what others have had to say about them.  This, then, goes a long way toward justifying writing about music. And it means I don't buy into that old canard "Writing about music is like dancing about architecture." Pshaw!
Posted by Sam Byrd at 2:39 PM 4 comments:

OK, here is it is, over a decade into the 21st century, and I'm starting a blog. I'll flesh this out as I go along, but for now I'm seeing this as part commonplace book, part stockpile of lists, part updates on musical activities, part light criticism, and part repository for some of my earlier writing. There probably won't be many pictures. The title of this blog comes, of course, from Sun Ra's poem "The Far Off Place" (later appearing as the lyrics to "I'll Wait for You"):

I hope to write some about Sun Ra at some point, but for now the best I can do is point you to another blog, a major inspiration for these ramblings: Rodger Coleman's excellent NuVoid.  Among tons of excellent music writing, Rodger has a long ongoing series on Sun Ra's music he calls Sun Ra Sunday.  Highly recommended!

For a few years now, I've been posting lists of what I've been listening to and what I've been reading on Rodger's blog, in the comments section.  I'll continue to do that, but I'll probably post those lists here as well. There will probably be a fair amount of lists here. In many ways, I live by the list. I like to keep them, and I try to follow them (when they're that kind of list). More on that later too.
Posted by Sam Byrd at 5:01 PM 1 comment: