As a follow-up to my overview of the Sun Ra bonus tracks from the 2014 iTunes Sun Ra remasters, be sure and check out Christopher Eddy's review and comparison of the mastering job done by Michael Anderson and Irwin Chusid for iTunes. Eddy helpfully includes streaming versions of mixes comparing the Saturn LP, Impulse LP, Evidence CD, Scorpio LP, and iTunes remaster versions of four songs. While you're there, check out the rest of this excellent blog. Saturn research at its most exemplary!
Posted by Sam Byrd at 3:30 PM No comments: 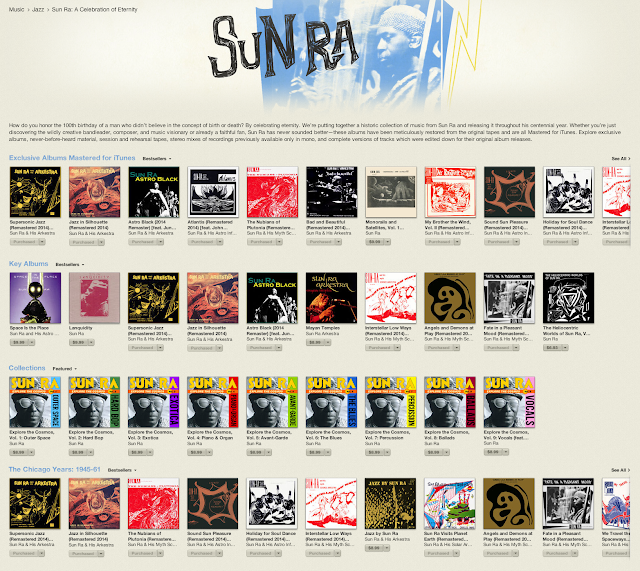 iTunes has recently released remasters of many key Sun Ra recordings. Several of these titles include bonus hitherto-unreleased tracks. Here's a report on some of my purchases; I also posted this to the Saturn listserv, but posts there aren't showing up on the website, so I thought I'd include this here too.​​

I am focusing mainly on the bonus material here, but in general, these all sound fantastic to my ears (I am no audiophile) . These are just quick notes that hopefully will help others decide if these bonus cuts are worth it (I have to say: yes!). For the individual tracks, I don’t have any detailed info that the liner notes that are album-only might have. Any further info would be appreciated! In addition to the unreleased tracks, this marks the first official release in any form of "Astro Black" since it first came out on Impulse in 1972. This alone is a major, major release. "Astro Black" is in my top five all-time Ra faves list. The reissue sounds the best I’ve ever heard it. Crystal clean. Probably Ronnie Boykins' best Ra performance. Killer Gilmore ("Discipline 99") and beautifully subtle moog (the title track). Highly recommended!

"When Sun Comes Out" bonus track:
1. The Nile part 2 (5:47) Fades in pretty much where “The Nile” fades out (if a bit slower?), with the bass line quickly dropping out for a 3-minute restrained, melodic drum solo before the bass comes back in under a simmering Eastern-style flute and gently plonking piano.

"Bad & Beautiful" bonus track:
1. Street of Dreams (5:49) (Not a Ra composition) A nice piano intro takes us into “Search Light Blues” territory, a piano/bass/drums trio until Pat Patrick comes in around halfway through with a beautiful baritone sax solo. “a previously unreleased sonic tapestry from the same tape as track 1. It's a labyrinthine 23-­minute ‘space suite,’ full of bluster, unexpected dynamic twists, and a vocal centerpiece by June Tyson and the band.”--liner notes

The highlight of this piece for me is the moog solo--it’s killer! “Invisible shield” bonus tracks:
1. But not for me (6:48)  I’m pretty sure this is the same track that appeared on “Standards”
2. Islands in the sun (10:23) --1st 5 min. is released part...then comes really nice piano solo, nice bass clarinet and flute work, same groove. New part basically more of same.

Bonus tracks from “Explore the Cosmos” collections, as identified by Irwin Chusid (not marked as such on iTunes):
Vol. 4 - Piano and Organ
1. April in Paris - Choreographers Workshop rehearsal tape (3:56)  Nice solo piano rendition, joined midway through by bongos.
2. Rhythm & Romance - organ tapes (2:45) Organ, accompanied by tentative drumming. Sounds later than most of the late-’40s-early ‘50s organ stuff on the “Eternal Myth” box set.
3. Gone with the Wind (4:08) Solo piano, nice. What period? Who the hell knows? Maybe late ‘70s Improvising Artists era?
4. My Dreams Tell Me (Part 1) - organ tapes (3:43) Solo organ. A Ra original? This sounds older, more in line with some of the solo organ stuff on the box set.
5. Piano Interlude (1949) (0:40) Just that. Short, contemplative. Ends with phone ring! Similar to some of Monorails bonus tracks.

Vol. 9 - Vocals
1. Dreams Come True: the sample sounded extremely similar to versions on box set. Didn’t buy.
2. Memories of You (1949) (1:40) Ra crooning over sultry piano. Very similar to “Smile” from box set.
3. Recollections of There (4:52) w/Theda Barbara. Cecil-ish piano, abstract, questing, with cymbal flourishes. Theda Barbara comes in with wordless vocalizing. Excellent!
4. Smile (1949): same as on box set.
5. Perfidious Lover: Box set has “version 2.” Sample sounded just like that version. Didn’t buy.
6. The Living Myth (1976) (3:53) w/June Tyson. A band arrangement for the last part of “Along Came Ra,” with June Tyson. Gilmore (?), and others on vocals, taken at a slow pace. After the vocals, the band blossoms out into a set of baritone sax-anchored flourishes that sound conducted. Excellent! 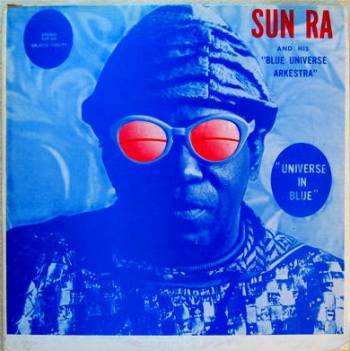 I have delved into some of the recent iTunes 2014 Sun Ra remasters. Watch this space for the quick overview I posted to the Saturn listserv. For this re-read of the two latest Song of Ice and Fire novels, I am trying the concurrent reading of both of them at once, as outlined here. Gotta say, it's a gas! The image comes from a different source, but I couldn't resist.
Posted by Sam Byrd at 4:57 PM No comments:

Reading is sometimes thought of as a form of escapism. . . . But a book can also be where one finds oneself; and when a reader is grasped and held by a book, reading does not feel like an escape from life so much as it feels like an urgent, crucial dimension of life itself. (Rebecca Mead, My Life in Middlemarch, as quoted by Claire Messud)

Sound Excerpt from the Show Last Night (plus photo)

Here's a quick excerpt from the trio performance (plus dancers) last night. Great fun!
Posted by Sam Byrd at 2:29 PM No comments:

I'm playing in a trio this weekend, with Daniel Barbiero and Jimmy Ghaphery, at a benefit for the Pyramid Atlantic. I'm very excited about this; it'll be the first time we've played together as a trio, and it will be all improv, with dancers. This group is what is billed as "Site-Specific Improvisation in sound and movement with musicians."

It's a Dan Barbiero double bill, with Colla Parte also playing, and I am equally psyched to see them after enjoying so many of their recordings. If you are in the DC area, come check out this nice evening of improvisational fireworks. Sparklers optional.