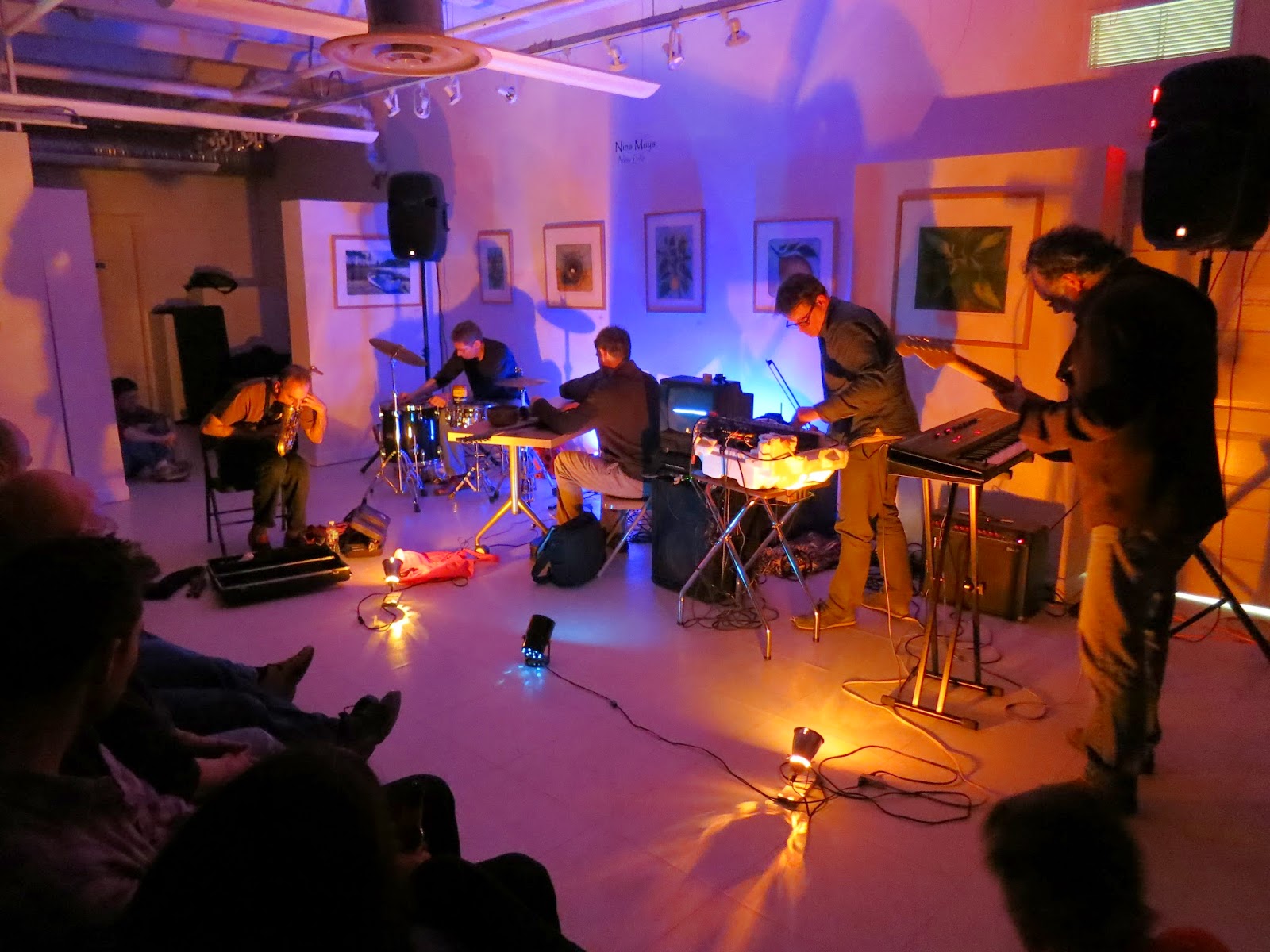 This doesn't really count as a year-end highlights sort of thing, but I have been meaning to jot down some thoughts on the metamorphosis from what was once a trio (who occasionally welcomed additional sit-ins) to a full-fledged quintet, New Ting Ting Loft. The trio (New Loft: Jimmy, Tim, and I) were a pretty tight-knit unit, weathering and coming out of the loss of Jon Mela from the group with a renewed sense of purpose and direction: all improv, pretty much all the time. Like I said, we would occasionally have folks sit in, and it would always be enjoyable. One memorable gig was the Joyful Noise Big Band Sun Ra tribute show, back in 2003. New Loft opened, and we took advantage of the presence of so many like-minded friends being there for the big band by having several of them join our set, one at a time, over the course of the half-hour-or-so improv.

Our development changed with the permanent addition of Tommy and Ben from Ting Ting Jahe. It was Jimmy's idea to shake things up by inviting the two electronic noisters formerly known as the Pussy Boys (don't ask) to join us as the Godzilla Meets King Kong Quintet. Things clicked right away from the beginning, as can be heard on our first time playing together, 2013-05-06, and our first gig, 2013-05-13.


In many ways, the timing was perfect. All three of us were ready for the quantum leap. In terms of my own playing, I had long enjoyed the various noise and electronic avant musicians we'd often shared shows with. Over the last few years, I’d begun getting more and more into experimentation with physical handling of things and combining them with the kit, scraping objects together and generating non-idiomatic sounds and textures...that kind of activity is fun in and of itself, and it serves to put me in a great mind set for when I return to sticks. It changes the way I play. Jimmy had recently expanded his arsenal to include clarinet, and his approach to that instrument comes as much from abstract noise as from “conventional” playing. In the meanwhile, Tim had acquired an electronic keyboard, and his often unconventional coaxing of sound from it (like playing it with the neck of his guitar) widely expanded our palette.

So we were primed for Tommy and Ben's unique approaches to sound and texture. Their arsenal of sound possibilities (electronics, keyboards, prepared guitar, scraped and bowed styrofoam, 8-tracks, samples, radio, contact mics, Android apps, and other unknown sources of sound) perfectly melded with our direction, and enabled us to veer off into new territories. Having it be permanent has solidified us as a band, creating more opportunities for interaction and for sub-sets of sound activity within the quintet. Lots of room for noise, and lots of room for space. We don’t always all play at the same time, and there’s no need to; something’s always going on, and it’s always interesting.

Chart our progress on the Internet Archive. We try to get together once a week; Jimmy is kind enough to record our sessions with his Edirol R09HR digital recorder and he gets me the file for uploading within the week. So, new stuff popping up all the time! So, feeling adventurous? Check out this week's session:

And if you’re feeling really adventurous: we are available for parties. 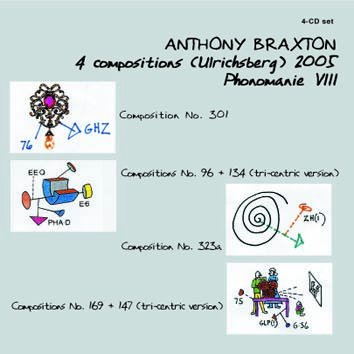 Includes a great version of Composition 96...but I think the large ensemble piece Compositions No. 169 + 147 is my favorite on this box. At any rate, I feel like I will -always- be playing catch-up with the work of Mr. Braxton! Now that the dust has settled on this, I gotta say I think it's D'Angelo's strongest yet. There's this special thing he does with the rhythm; it's not just that the backbeat is delayed oh so slightly to deepen the funk, it's also that his vocals are even further in the back pocket of the backbeat. And the beats themselves are almost disjointed and slightly off, just off enough to be deeply, slowly grooving. Check out this effect especially on "Prayer." He did this on Voodoo too, and of course it all goes back to There's a Riot Goin' On. Here, he takes it to a whole new level.

Damn, I'd forgotten how good this is.

Photos from our set last Saturday at Union Arts in DC. Daniel Barbiero on double bass, Perry Conticchio on tenor and soprano sax, flute, and bass clarinet, and yours truly on drums. A whirlwind set that felt like 15 minutes and lasted over 35. 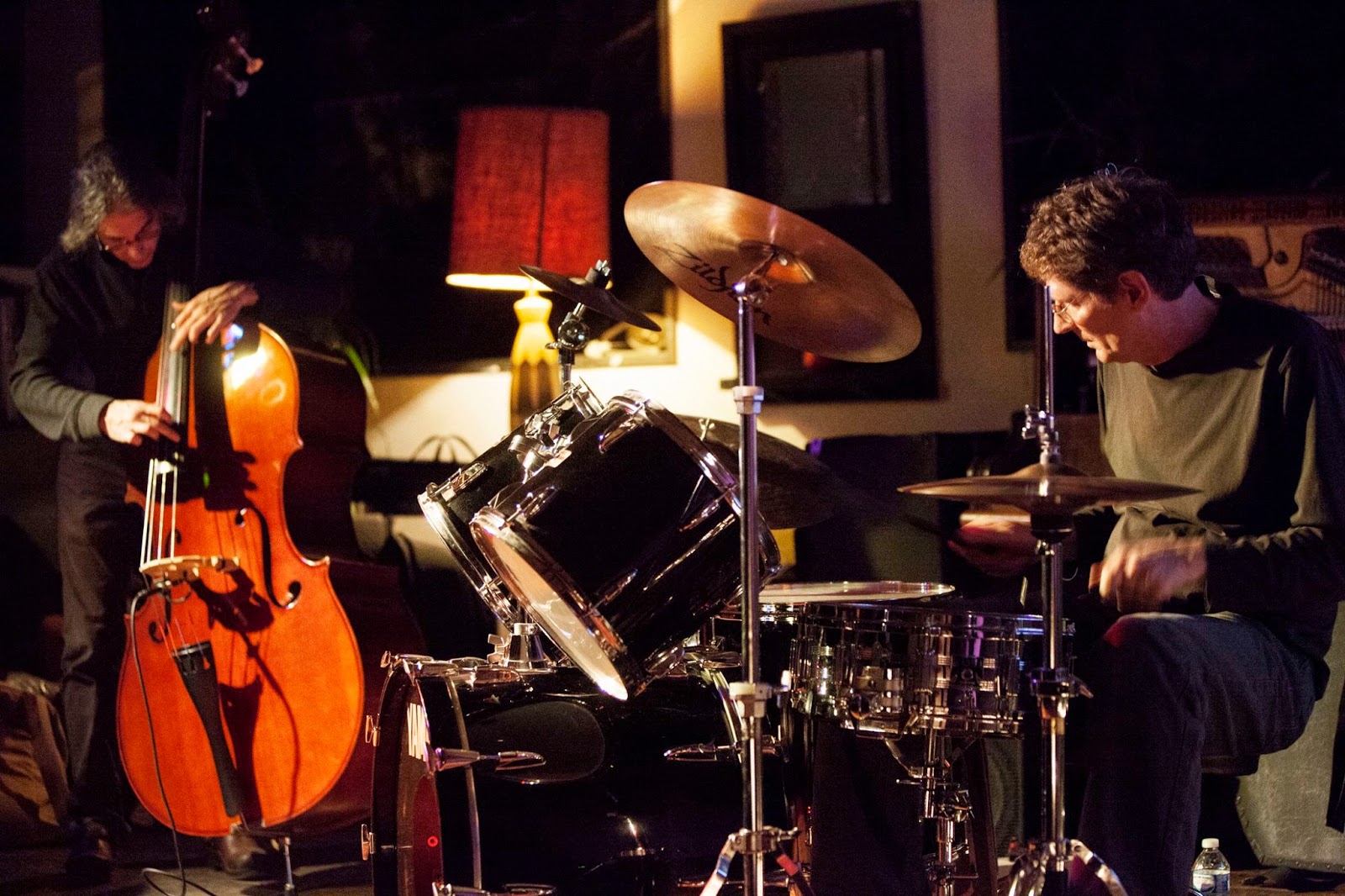 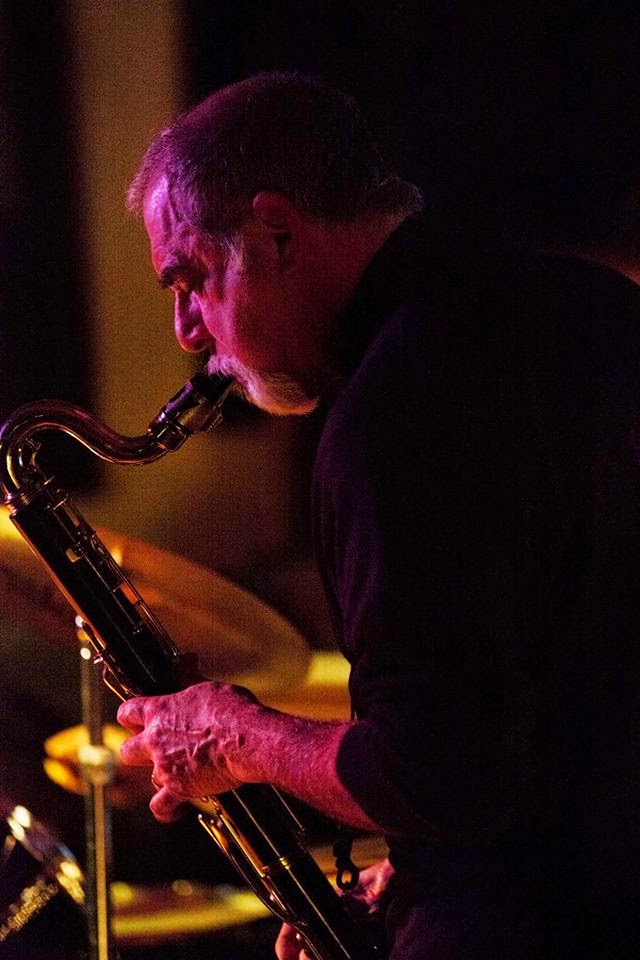 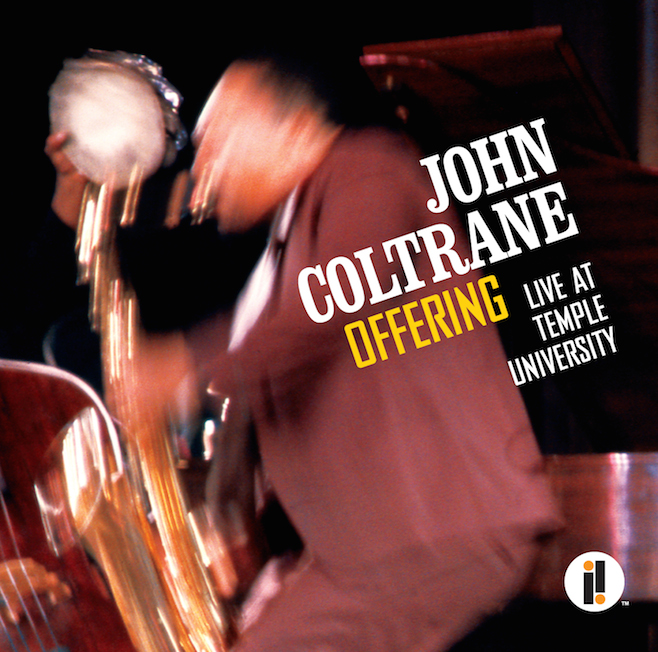 I don't even know where to start saying anything about this. Brilliant, transcendent, and so, so much better sounding than the incomplete version that has circulated for years. Excellent!


Yet because of its directness, its immediacy, improvisation is often perceived simply as something musicians do when they arrive on stage, as if by default, without sheets of manuscript paper. They invent nothing, they simply access their memory bank. But just as thought has preceded the mark on the manuscript paper in the composer's studio, so before he emits a sound the improviser has trained and prepared himself; he has reflected on the new musical problems that have arisen; he has pondered and perhaps rejected the 'reformulation of successful modes'; he has recalled the unresolved tensions of previous performances; he has considered the relationships with other players: in short, he has engaged in musical thought. A particular improvisation is one of many possible consequences of these considerations; spontaneously and publicly, they are given temporal musical expression. (John Tilbury, Cornelius Cardew: A Life Unfinished,Copula, 2008, p. 318)

Mindbreath Trio This Saturday in DC

Got a gig this Saturday! I was asked to be a part of the Mindbreath Trio, with 2/3 of Colla Parte: Perry Conticchio on sax and Daniel Barbiero on double bass (thanks for the invite, Dan!). We'll be playing at Union Arts, as part of the three-night event of improvised music, The Preparation. I am both scared and excited. If you're in the DC area, stop by! Details in the link.
Posted by Sam Byrd at 3:49 PM No comments:

I want to call your attention to a couple of items from members of New Ting Ting Loft:


Stretching time, ideas, and texture. Listening patiently to repetition and improvisational counterpoint. Two long pieces clocking in at 90 minutes each, both using the same 90 minute guitar improvisation as a common layer. The first piece adds a repeated 45 minute clarinet improvisation with a ninety minute wooden flute improvisation in the distance. The second piece adds a series of themes for alto sax with liberal ornamentation. The final piece is a short 10 minute sax quartet assembled from 4 of the sax tracks found on the previous piece.

He really is going for the long form here! Layers of sound recede in the distance, like the fog on the beautiful album cover (pictured above).

2. A video of Tommy Birchett's fantastic solo performance at the MoMA PS1 Print Shop in New York City in December. 8-track hijinx and even a bit o' swing! Plunderphonically phun:

Unreleased (and heretofore undocumented) studio session from 1973...a must-have for Ra fans! Very much in the vein of Crystal Spears and Cymbals, this album has some fantastic synth/percussion interplay and some killer Gilmore. Understated and all-new, fresh and familiar. Brilliant and demanding. Who knows how many more mysteries are out there from Mr. Ra? Keep 'em coming!

Hanging out at Heeltop Home Studio... 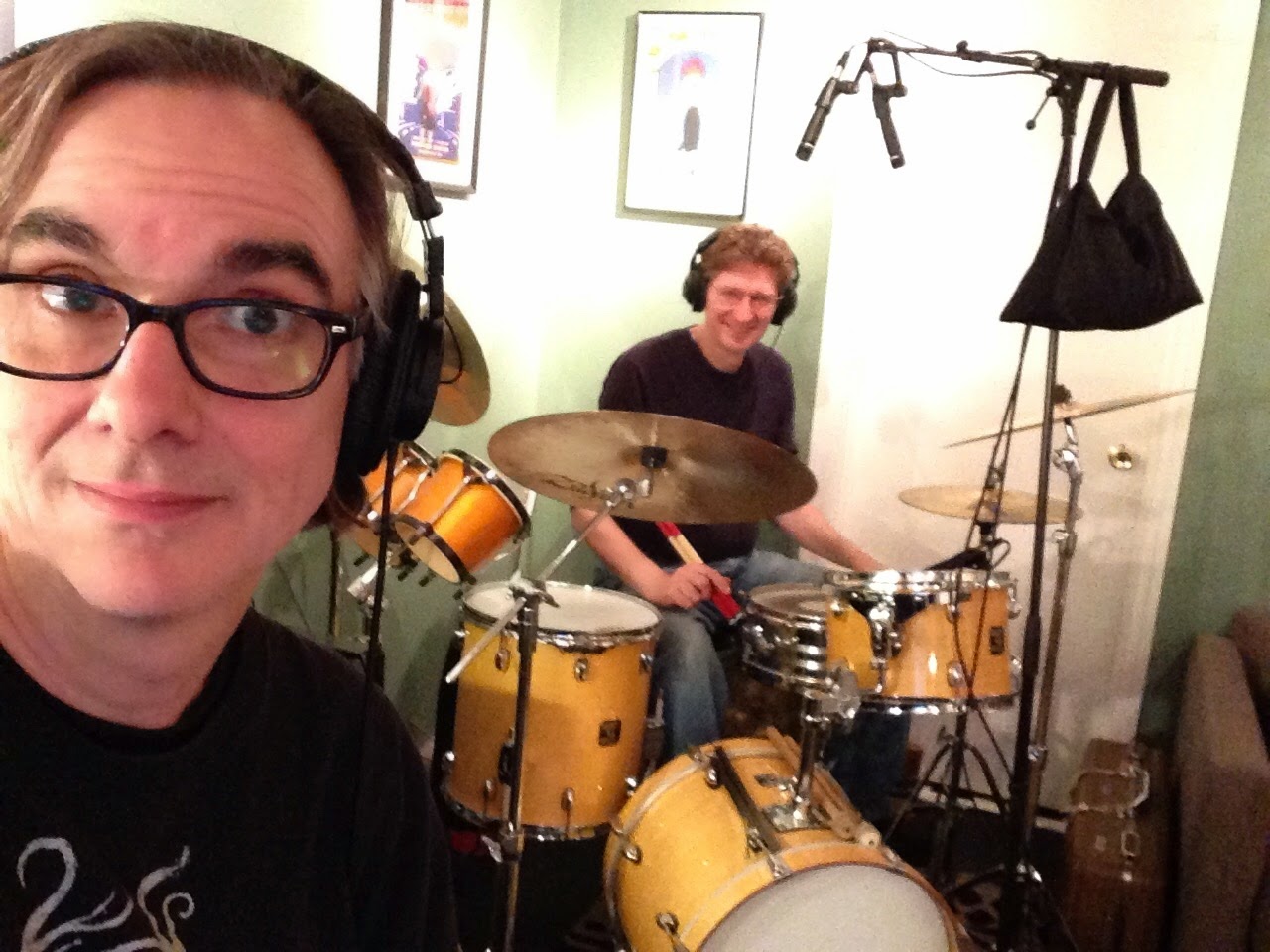